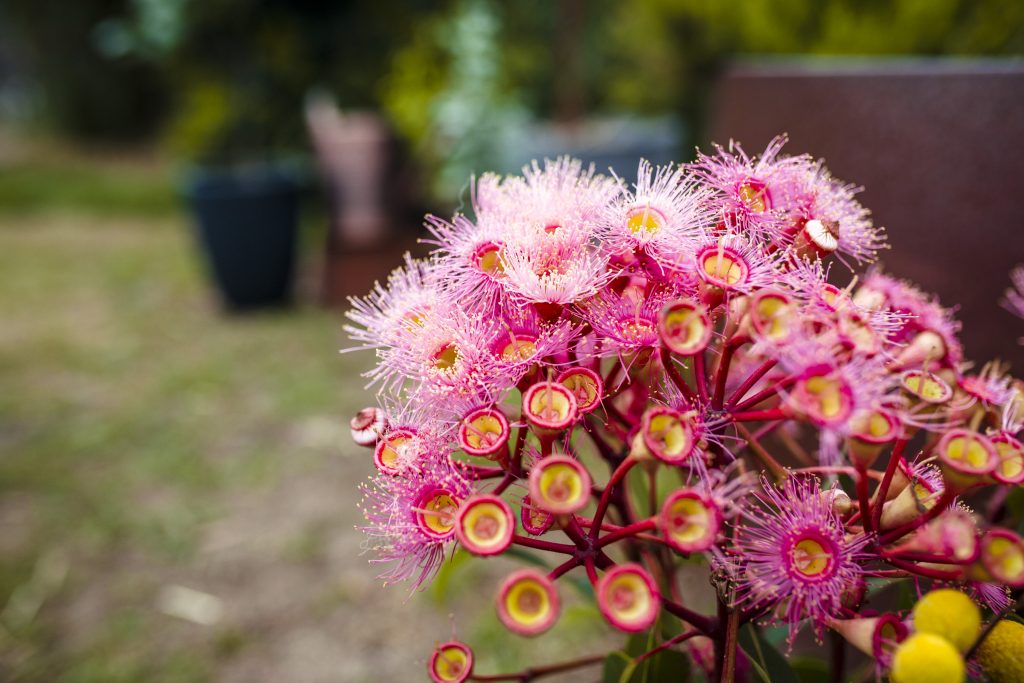 Summer in Australia is a classic time of year to gather your nearest and dearest around the table for a meal. This year, we’re feeling particularly inspired to incorporate more of Australia’s very own – but lesser used – native ingredients, so we turned to some of the country’s best chefs for ideas on how to incorporate more Australian native produce into our cooking, drinking, and even decorating this summer, and beyond.

“There are so many simple and easy ways to substitute native ingredients into your everyday cooking. Some of my favourites for an Aussie feast would be taking a classic staple like Sydney Rock oysters and serving them with a finger lime mignonette made with Chardonnay vinegar, finger limes and native pepper.

“For desserts, swap out a traditional pecan pie recipe with macadamia and toasted wattle seeds, or mix yourself a classic gin Spritz made with a simple homemade lemon-myrtle infused sugar syrup.”

Native finger lime is pretty straightforward because it has such great texture. It’s just citrus caviar.

I put it in Vietnamese dipping sauces like a finger lime nước chấm. And make simple dressings with it for sashimi. It  really adds a burst and pop of acidity wherever you need it.”

“At home, I use pepperberries where I would normally use pepper, perhaps to season a tartare, or do anything salt and pepper style. And even sometimes in desserts and sauces.

“When they’re in season, I really enjoy making a Gin and Tonic with finger limes or desert limes. I also use finger lime in a lot of places where you’d use citrus, like on a pavlova, or to season raw fish. Personally, I love the aroma of lemon myrtle, too. I make ice-creams infused with the leaves, as well as syrups, cocktails and kombucha.”

“I love wattle seed for its flavour, versatility and for the fact that it’s so readily available. These days, it’s pretty easy to find wattle seed at supermarkets and online. The flavour is a bit like hazelnut or coffee, and they work really well with both sweet and savoury foods like potato, game meats, vanilla, coffee and chocolate.

“For a savoury option, try mixing wattle seeds with salt and pepper and using it as a rub for a grilled kangaroo loin. Or if you want to go sweet, add some to your favourite chocolate brownie recipe.”

“Native Australian holy basil is not quite prolific in its availability yet, however the seeds can be purchased and it will keep going well into the colder months, especially if you keep it somewhere sunny. I use the basil on leftover bits of meat, maybe a duck or pork belly. I’d stir-fry the meat with a pounded paste of garlic, chilli and coriander roots, seasoned with a little fish sauce, soy sauce, and then a massive handful of the native basil thrown in. It’s medicinal, delicious and a great way to use up any leftovers!”

Whenever I explain to someone about native ingredients in Australia and how to use them best, I tend to recommend certain types that have similarities to something they would have used before.

“For example, finger lime: although the texture and appearance is different, you can relate it to the intense sour flavour of other citrus. Lemon myrtle can be used like a kaffir lime leaf in broths and milk infusions. But my particular favourite is river mint. It’s an extremely versatile native herb. The flavour is similar to peppermint and can be used to make tea, a beautiful jelly to accompany roast lamb, or even just picked fresh and tossed with summer strawberries for a clean, simple dessert.”

“We’re delighted to have native mountain pepper growing locally in this region, as well as at our Dairy Flat Farm. Both the leaves and berries are usable – the latter in their fresh, dried and milled form. The leaves, meanwhile, have a particularly strong earthy and spicy flavour. We like serving a sprig alongside a kangaroo sausage roll or spring roll (the minced filling already seasoned with local herbs and a little ground mountain pepper) and an apple and muntry chutney (we’re also experimenting with growing muntries!).

“This is a great combination to offer our overseas guests who stay with us at Lake House and are curious about Australian native produce. Adding a pot of native river mint to outdoor tables is a lovely thing to do in summer, too. It’s aromatic but also a great insect repellent and super easy to grow.”

“My favourite native ingredient is the bunya nut. They are so special – it takes 100 years for a bunya tree to begin fruiting, and it only ever fruits every second year. They grow in a type of pinecone the size of your head, and the nuts are found on the inside of the hard outer shell. You can use bunya nuts in so many ways, like milling them and drying them into a flour, or you can grate them into soups as a thickening agent. They have a subtle and sweet taste, so they also go particularly well with cream in desserts. One of the easiest ways to cook with them is to substitute other nuts for bunya nuts. For example, if you’re going to make a pudding, use chopped bunya nuts instead of almonds.”

“Around the warmer months of the year, you can’t go past finger limes if you’re looking to add a native twist to your menu. It’s such a simple way to get some extra zing into your summer time cooking. Finger limes and any seafood are the best of buds, but in particular, they’re amazing with oysters. So before your next dinner party, simply spoon some finger lime jewels over some freshly shucked oysters and it’s bound to be a talking point.”

“I like to make miso with bunya nuts. There’s nothing else in it, just bunya nuts, lacto-fermented in barrels. We grow the mold on the nuts first, then make the miso paste and put it to bed. Around the six or seventh month mark, it explodes into this amazing flavour and aroma. It’s very much like miso, but with a unique Australian flavour.

“My eldest daughter turned vegan for a while, so I was making lots of vegan cheeses using bunya nuts, too. For snacks, I made a bunya nut cream cheese, fermented gubinge (also known as Kakadu plum) and long yam crackers. The combination was so delicious.”

Feeling inspired to grow your own native edibles garden? Head to your local plant nursery and have a chat with the experts.